Most Expensive Water in the U.S.

The Most Expensive Water in the Country... Brought to You by Cal Am!

In 2015 Food & Water Watch completed a study of the 500 largest public and private water systems across the county, ranking them by the annual cost of water to the consumer. This is the largest study of its kind ever done. The study was based on a household using 5000 gallons of water monthly / 60,000 gallons annually.

In the original study, the Monterey Peninsula was ranked #9 of the Top Ten Most Expensive water providers in the country with an annual cost to the consumer of $716. Since then the average Cal Am customer on the Peninsula has seen a 68% increase in their water cost and that percentage is much higher if you use water in tiers 3, 4 or 5. The Food & Water Watch study is based on moderate water usage of 5000 gallons monthly, which falls into Cal Am’s Tier 2 billing here on the Peninsula.

In April 2017 Food & Water Watch announced their 2017 update of the Top Ten Most Expensive Water Providers in the Country. The Monterey Peninsula now ranks #1 with the most expensive water in the United States. The annual cost to Cal Am’s Peninsula customers for 60,000 gallons is $1202.

With Cal Am’s  March 2017 changes in rate structure and additional charges, water bills for many Cal Am customers doubled or tripled. One of the new charges on our Cal Am bills is $64 million for water we didn’t use due to our conservation efforts as a community. That’s right, Cal Am can charge us for water we did not use to make up for their lost revenue under the California Public Utilities Commission rules.

To make matters worse, the cost for new water projects like Cal Am’s proposed desal plant, the Pure Water Monterey (recycled water) project, or the pipeline currently under construction, are NOT yet included on our water bills. Plus Cal Am is asking the CPUC for another 22.7% rate increase over the next three years. Costs will continue to rise sharply with Cal Am. We can do better than this with publicly owned water. 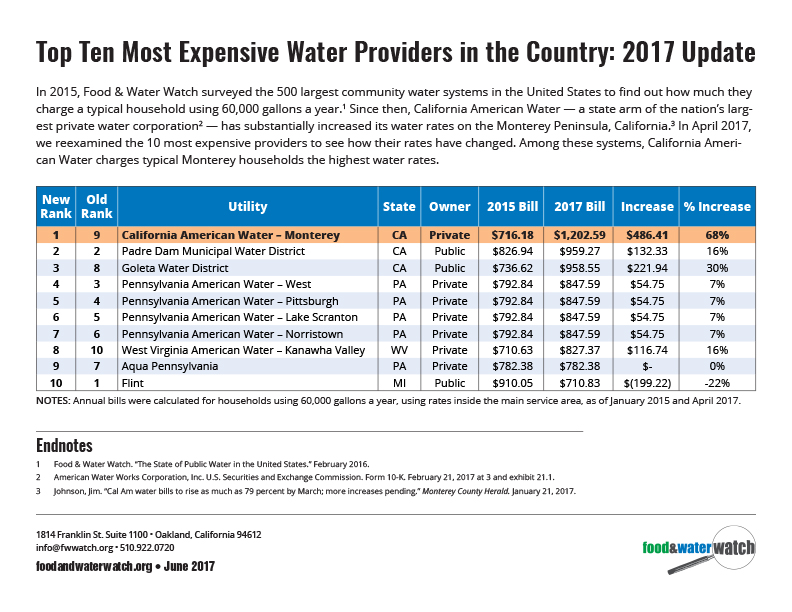